*We will not be taking walk-ins for this month's Friday 13th. Please book in advance.

Making Greta Thunberg Proud: Eco-Friendly Tattoo Talk
"Mother Earth is real, but she won't clean up your mess. This is where a vegan tattoo or eco-friendly tattoo can help."
Owner Dina DiCenso talks to Tattoodo about eco friendly tattooing.

"Tattoo artists share the most painful places to get tattooed from their own experience, and from the experiences of their clients."
Click to watch INKED MAGAZINE interview artists, including Gristle's own Fan and Dan.
Jamboree, June 17th
​We will be tattooing at Woodstock Farm Sanctuary at their annual fundraiser.

April 27th, 12-8pm: Gristle Tattoo fundraiser for the animals-rights organization Mercy for Animals with farm-animals flash and 50% of all profit donated to the charity.

December 6-11 Tattoos to benefit The Humane League.  The Humane League works to reduce animal suffering through grassroots education to change eating habits and corporate campaigns to reform farm animal treatment.  Flash will be posted on Instagram by the end of November. 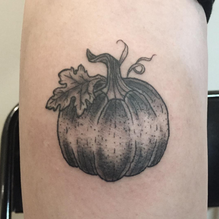 ​October 23-30:
Dana, our apprentice, will be doing $31 Halloween tattoos!
Flash designs will be posted soon.

​Email dana@gristletattoo.com to schedule an appointment. 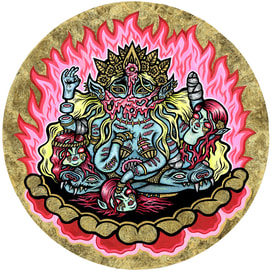 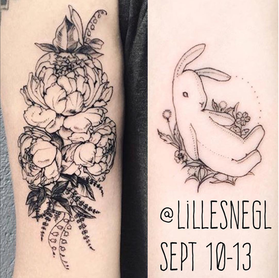 September 10th-13th
Ligia will be tattooing at The Convent in Philadelphia!!

Email ligia@gristletattoo.com to schedule an appointment.

Ligia and Kayla will be doing CATTOOS for a Bradford TnR (@bradford_tnr), a tiny little trap, neuter and release group in Brooklyn.  Stay tuned for designs.

April 28-May 1st: Tattoo fundraising event for Wolf Conservation Center.  50% of proceeds will be donated to this amazing organization. 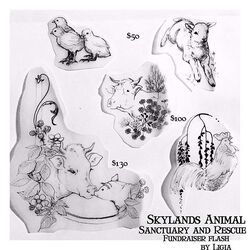 ​Feb 24-28th, 2016:
Ligia will be doing a tattoo fundraiser for
Skylands Animal Sanctuary and Rescue.

50% of funds raised will be donated. 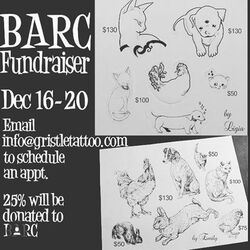 Dec 16-20th, 2015:
​
Tattoo fund raiser for our friends at BARC!
​If you don't want a tattoo, donate to BARC through their website or adopt.

October 26, 2015: Our article on nipple and areola tattoos was published in Oncology Nursing Forum! The article examines oncology care providers’ knowledge of tattooing options for patients who have elected to have breast reconstruction as part of their breast cancer treatment.  We found there is a lack of knowledge in this area and suggest ways providers may provide their patients with the best care.  Hint: it involves having professionals involved in every step of the health care process, including professional tattooers!
Gristle is proud to announce we have started offering nipple and areola tattoo services.  We are happy to be able to help breast cancer survivors on their journey and enable them to feel whole again. The nipple tattoo, while a very small part of the breast cancer survivor’s journey, is an extremely important piece of the puzzle.  A well done nipple tattoo can help the survivor regain their confidence.  For more information email info@gristletattoo.com.
November 2014

Check us out in the vegan lifestyle magazine LAIKA.  They interviewed us for an article on vegan tattoos and Franco did the script for the title page. 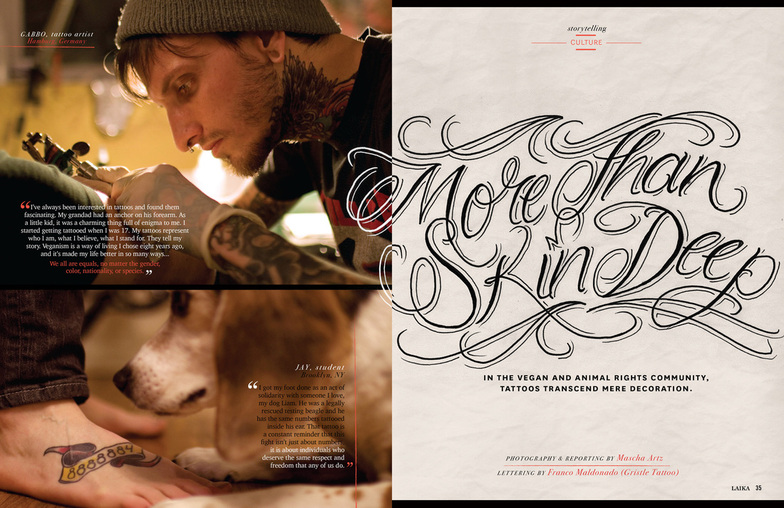 We're excited to announce this year's silent art auction fundraiser will be for Wolf Conservation Center! WCC is located just outside NYC so if you've always wanted to sleep outdoors with the wolves, they can make your dream come true. The week of May 25th - June 1st we'll be doing wolf & wolf themed tattoos from a special flash sheet to be posted as the date gets closer. Then June 1st there will be a silent art auction from 6-10pm. From 6-7pm there will be a very special guest...ATKA THE AMBASSADOR WOLF!! And of course 100% of all proceeds go to WCC. One final way to help the wolves is to sign this petition on behalf of an endangered Mexican Gray Wolf recently shot by a Wildlife Services officer who is supposed to be protecting them: http://bit.ly/ZdDZtQ

If you want to donate artwork to the auction email info@gristletattoo.com 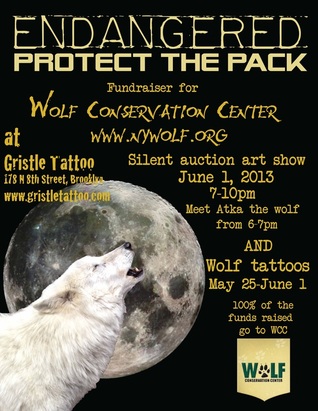 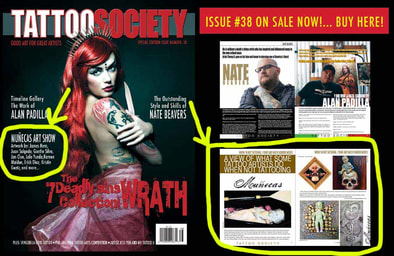 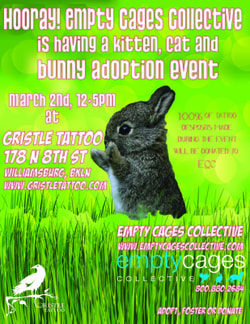 100% of tattoo deposits made during the event are donated to ECC.
​If you can't adopt, foster, volunteer or donate!

Jeremy Hush's piece Rat Queen received a nice write up in Juxtapoz Magazine!  Rat Queen is part of our Carnival of Terror art show.  Stop by to see it! 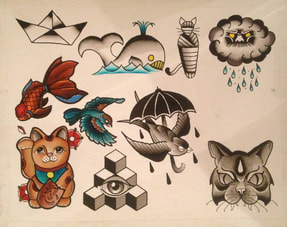 The SoS campaign provides food, bedding, medical care and other necessities to all kinds of animal victims of Sandy. 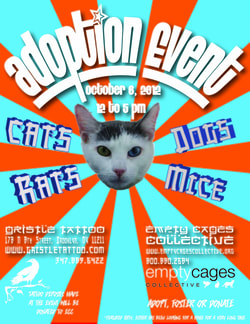 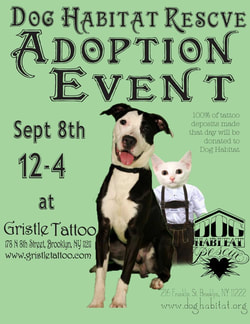 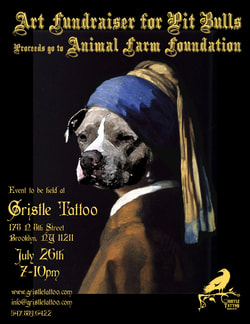